Last week, Bing announced a new effort to use its search engine to warn consumers about threats from “fake” online pharmacies. The big problem is that at least some of the online pharmacies they list are not fake, but represent very real, licensed pharmacies, ones that require valid prescriptions and have been safely helping Americans afford medication for years. We know this because these pharmacies have been carefully evaluated, inspected, and monitored by us at PharmacyChecker.com, and meet high standards of pharmacy practice. See our standards: http://www.pharmacychecker.com/verification_program_guide_and_standards_1_3.pdf.

The online pharmacies targeted by Bing, which are approved in our program, are all located outside the U.S. Curtailing online access to lower cost and safe foreign medication using scare tactics is a strategy employed by the pharmaceutical industry. Indeed, Bing’s action seems to have a lot to do with stopping safe personal drug importation and will recklessly alarm Americans so they don’t buy more affordable medication from other countries.

Here is the warning which appears when a consumer’s Bing search results include links to one of these online pharmacies and they try to click on the link to that online pharmacy:

To choose the pharmacies it targets, Bing is relying on a list of online pharmacies which have received warning letters from the FDA. But, in at least several cases, these warning letters, which you can find on the FDA’s website, do not indicate a pharmacy to be fake, nor do they pertain to sales of counterfeit or adulterated medications, nor to any problems with the pharmacy meeting good standards of practice. Instead they relate to 1) sales of lawfully manufactured generic versions of drugs that are still on patent in the U.S., and 2) medications that are approved in Canada but not in the U.S. We will examine each of these letters fully over the next week, but our initial review indicates that these issues have been addressed by the online pharmacies in our Verification Program that received the letters.

The genesis of Bing’s action, which is most likely coordinated with the FDA, comes from the scare tactics about foreign medications conceived by pharmaceutical companies and their lobbying largesse. Why else would Bing decide to target only online pharmacies when many other pharmacies, pharmaceutical companies, medical device manufactures, and dietary supplement distributors have also received FDA warning letters for various infractions, yet Bing does not target them with its pop-up warning?

Bing’s actions would be great if the websites it is targeting were all fake or rogue online pharmacies, but they are not. When consumers see Bing’s warning, they will likely do one of three things:

These are horrible outcomes. Yes, warning Americans about rogue online pharmacies is good public policy. But leading Americans away from safe personal drug importation will just lead to fewer people getting medications they need, more Americans choosing between food and medicine, and larger profits for the big drug companies.

This will not be major headline news anytime soon but it’s true. Last week our friends at RxRights blogged about new data from the Commonwealth Fund showing that the number of Americans ages 19-64 who did not fill prescriptions due to cost decreased to a depressing 35 million in 2014 from the even more depressing figure of 50 million in 2012. Obamacare, lower unemployment, and a stronger economy in which people feel more secure paying for even very expensive medications are largely responsible.  Minus the very expensive medications – that’s all good stuff.

And how about international online pharmacies and personal drug importation? Well, just yesterday the U.S. Centers for Disease Control and Prevention (CDC) reported that about 2% of Americans are still buying medication from foreign countries. That’s about 5 million Americans who would potentially go without needed medication if it were not for lower cost foreign medication sold by safe international online pharmacies.

I did not use the word “potentially” loosely. Some of those five million are getting nabbed by rogue online pharmacies, resulting in too many Americans taking substandard, adulterated, or counterfeit medications. If those people are informed properly they will not be victims. PharmacyChecker.com is there for you: if you are one of the 35 million Americans wondering whether you can afford that medication prescribed by your doctor, we’re doing better than ever at empowering you with information that helps you get the medications you need at a price you can afford while steering clear of rogue online pharmacies.

It’s important to remember how dangerous it is to not take the medications you need. One expert at CDC stated: “People who do not take their medication as prescribed have more hospitalizations, emergency room visits and an increased burden of their illness.”

It’s important to note that the CDC report provided lower figures on how many Americans are going without prescribed medications due to cost than the Commonwealth Fund reported: about one in 10. We’re going to look at the data in the coming weeks and provide you some guidance on this discrepancy. But clearly the overall numbers have gotten better in the last two years.

We thrive on these better numbers – more consumers accessing the healthcare they need –but with tens of millions of Americans saying they can’t afford their meds there’s so much more work to be done! 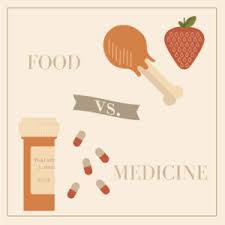 People should not have to go without one or the other

As we settle in to our Thanksgiving dinners tomorrow, let’s not forget the many millions of Americans who cut back on groceries each year to pay for medication or simply go without. How prevalent is this travesty? According to Consumer Reports, 21% of American adults with a prescription benefit and 39% without a prescription benefit are cutting back on groceries each year.

According to Hunger in America 2014, 14% of Americans receive charitable food assistance each year – about 46.5 million people. Of those people, 66% had to choose between “paying for food and paying for medicine or medical care in the past year, with 31 percent reporting facing this tradeoff every month.” That’s about 31 million Americans choosing between food and medical care/medicine each year.

The Consumer Reports survey shows that millions of middle class Americans are suffering under the burden of high drug prices. The Hunger in America 2014 survey shows how dramatically the poor are affected.

There is poverty in other advanced economies as well but with much lower rates of people struggling to afford food and medicine. We can do better in America. We hope that PharmacyChecker.com helps alleviate the burden of prescription drug costs and prevents sickness and lives lost when people find medication they can afford by using our information.

A healthy and happy Thanksgiving,

The journal Health Affairs recently published an article titled “Medication Affordability Gains Following Medicare Part D Are Eroding Among Elderly With Multiple Chronic Conditions.” The article is about changes in and problems with affordable access to medication for all Medicare enrollees who are 65 and over, not just those with chronic conditions. It focuses on two different time periods, 2007 to 2009 and 2009 to 2011. The data shows that while Medicare Part D initially improved access to affordable medication, some of those gains were lost, and for seniors taking the most medications, the most vulnerable, improvements may have disappeared entirely.

In 2005, before Part D plans were available, the study noted that an estimated 14.9% of seniors experienced cost-related problems accessing prescription drugs (meaning they did not take medicine as prescribed due to cost), also called cost-related prescription non-adherence (CRN). CRN decreased to 11.3% in 2007. Then, surprisingly, following the worst economic downturn since the Great Depression (during which the average wealth of the elderly dropped 20%), the number decreased further to 10.2%.

The CRN numbers are much worse for seniors with four or more chronic conditions, such as diabetes, cancer, hypertension, and asthma, among others, representing about 27% of all beneficiaries. END_OF_DOCUMENT_TOKEN_TO_BE_REPLACED

Pennsylvania Seniors Skipping Meals, Meds, or Both According to New Study

Seniors are continuing to skip meals or leave prescriptions unfilled due to budgetary constraints, according to a survey conducted by Public Health Management Corporation’s Center for Data Innovation (PHMC). PMHC surveyed 10,000 households in Southeastern Pennsylvania, and found that 112,500 older adults (60 +) in the region skipped a meal or didn’t fill a prescription because of tight budgets. The study points out that skipping either medication or a meal often leads to negative health outcomes. Many of the older adults skipping either had a chronic condition; 81% had arthritis, 67% had high blood pressure, and 50% had diabetes.

Read the results of the survey here.