On June 14 and 15, 2017, several individuals were arrested in Manitoba and British Columbia, Canada (CBC News – Manitoba) pursuant to a U.S. extradition request relating to a 2015 U.S. federal indictment of the parties on charges of illegal wholesale importation of medication into the U.S. including one batch of Avastin alleged to be counterfeit. That indictment pertains to events occurring between 2009-2011. PharmacyChecker.com strongly condemns any manufacturing and trafficking in counterfeit drugs.

Some of the individuals arrested in Manitoba, all of whom have been released on bail and are scheduled to appear in court in Canada on July 12, are also owners and/or executives of CanadaDrugs.com, Ltd. which operated a wholesale business and an online retail website. The indictment focused on the wholesale business (an area which CanadaDrugs has long since exited) and not on its website that sells medication directly to individuals for their own use pursuant to a valid prescription, does not sell Avastin, and remains licensed by the College of Pharmacists of Manitoba and an approved member of the PharmacyChecker Verification Program. We are not aware of any incident involving the sale of counterfeit medicine from CanadaDrugs.com during its 12 years operating as an approved member of our PharmacyChecker Verification Program.

We continue to closely follow this case and will post information about it, as we have done in the past.

Update: It was falsely reported on the LegitScript.com blog on July 6, 2017 that individuals connected with this case “had been extradited to the United States” (as shown below). This is incorrect and no such extraditions have occurred.  False and/or misleading reporting by LegitScript has occurred in the past in what appear to be attempts to foster negative perceptions of the practice of personal drug importation and of our own work in helping to make it safe. LegitScript is a company founded by John Horton, whom we have asked the House Committee on Oversight and Government Reform to investigate for possible government ethics violations. 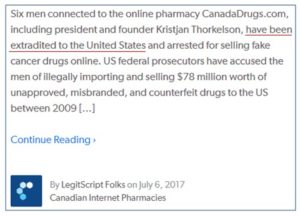