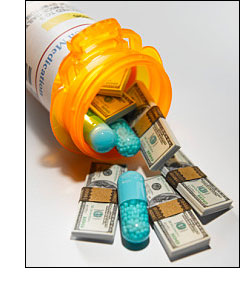 There is a drug affordability crisis in America. As we’ve reported, in 2010 48 million adults did not fill a prescription due to high drug costs. Perhaps surprisingly, in addition to millions of uninsured Americans, many Americans with insurance forgo prescription medication due to cost. Such insured Americans, unable to cover necessary medical costs, including medication, are often referred to as the underinsured. A previous study from 2004 by the American Society of Health-System Pharmacists reveals that 82.1% of those who restricted medication to due costs were actually insured. The picture is clear; underinsurance is a major issue in the battle to afford prescribed medication.

The Affordable Healthcare For America Act will help millions of Americans, including with their drug bills – but it is not a cure-all. It is uncertain how the new regulations will affect drug pricing. With drug price negotiations and cost reducing drug importation measures excluded from the healthcare act, and with millions of insured Americans currently struggling to pay high drug costs, what is to say newly insured people will not struggle to afford or go without prescribed medications?

Throughout the year PharmacyCheckerBlog will be following the research and predictions about drug affordability under the new law. Stay tuned…

“President Obama just released next year’s budget proposal and it has already sparked fierce criticism from the pharmaceutical industry. That’s because the plan would require Big Pharma to give an additional $156 billion in drug rebates over the next decade.”
This news comes from RxRight.org’s latest blog post, entitled Big Pharma balks at President’s proposed budget. Not surprisingly, as articulated by its president, John Castellani, the Pharmaceutical Research and Manufacturers of America is against the rebates and other reforms found in Obama’s budget. One point championed by Mr. Castellani as a reason to criticize President Obama is that the “Medicare Part D is working well for seniors.” While Part D has certainly helped many seniors afford needed medication, the RxRights post, and empirical data, show that millions of seniors still struggle to afford necessary, and sometimes life-saving, prescription drugs because of costs – despite Medicare Part D drugs plans.
In fact, the failure of Medicare Part D is one reason that reputable international online pharmacies remain a lifeline for Medicare enrollees. It appears if Obama’s budget is approved, without changes to his prescription drug rebate requests, then more Americans will forgo the international option in favor of domestic pharmacies.

Open Enrollment is the period between November 15th and December 31st each year when Medicare enrollees can sign up for Part D prescription drug coverage, or if they are already enrolled, cancel their current plan, or switch to a different plan. Open enrollment is the time to research, rate and compare the plan options so that you pick the plan that’s best for you. A month and a half means you don’t have to and should not rush to a decision…

The enrollment period can be confusing enough for Medicare members, and this year’s changes that come with the health reform may make sign-up decisions even more complicated. We therefore recommend MedicareDrugPlans.com as a very helpful site that gives you access to honest plan reviews from your peers.

On MedicareDrugPlans.com you can sort plan options by name, company, location, overall rating or individual rating (i.e.: information received from plan, customer service, choice of drugs, cost of plan, and ease of use). There are plan profiles for all plan options offered in 2011 and  forums about the drug plans,  and related Medicare issues, on which you can ask questions or add your input. This means you can find important information about the plans and what others have experienced using them. You may discover which plans covered all of a member’s drugs without problems or which have great or not-so-great customer service – all from a community of consumers just like you.