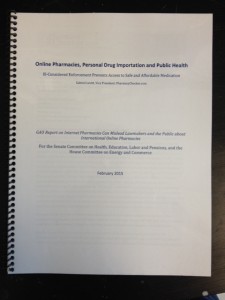 In July of the 2013, the Government Accountability Office (GAO) published a report about Internet Pharmacies with a focus on foreign websites that I believe strongly distorted the public record about buying medication online through personal drug importation. GAO’s report was submitted to Congress in response to Section 1127 of the Food and Drug Administration Safety and Innovation Act, intended to protect the public health. I wrote a report to refute the GAO’s positions in order to correct the public record regarding the intersection of online pharmacies, personal drug importation, drug affordability and the public health. I believe that my report about online pharmacies proves that the GAO’s efforts fell very short in getting to the truth about buying medication online.

Americans buy lower cost and safe medication internationally, often online, and it benefits their health and financial well-being. If it were not for the option of personally importing lower cost medication, often using the Internet, many Americans would just not be able to get medical treatments they need. People who can’t take needed medication often get sick and may even die.  The GAO report did not mention these facts.

The GAO seemed to conflate safe international online pharmacies with rogue online pharmacies in the same manner we’ve come to expect from the pharmaceutical industry, U.S. pharmacy trade associations and the FDA – by calling safe international online pharmacies “rogue.” The problem, for me, is that its lead author is not with the pharmaceutical industry, a U.S. pharmacy trade association, or the FDA. She is someone I’ve come to admire over the years just by following her work with GAO. So I can’t just say “look, it’s big Pharma again!” So for almost a year and a half I’ve written a report to, in part, prove to and remind myself that “we’re right and they’re wrong.” I’ve done that. I look forward to this report becoming a part of the public record.

Rogue online pharmacies, meaning drug-selling websites that are not safe (see my report for details), should be shutdown. Let’s get rid of them! However, if our elected leaders and regulators allow or enact policies to bring about an end to online access by Americans to safe and affordable medication and people get hurt, then they can’t say they didn’t know.

Below, I’ve pasted the cover letter from Tod Cooperman, MD, president of PharmacyChecker.com, and I that accompanied the hardcopy of the report we sent the congressional committees that received the GAO’s report in 2013. Each week we’ll be commenting on and posting the different sections of my report. To read the report now, visit “Online Pharmacies, Personal Drug Importation and Public Health”.

END_OF_DOCUMENT_TOKEN_TO_BE_REPLACED

When you’re fighting for something you believe in sometimes you lose perspective, and that can lead to overreaction and self-righteous indignation. I’ve been very critical of the FDA because I believe the agency is not doing right by Americans consumers on the issue of online pharmacies and personal drug importation. FDA seems incapable of admitting that there are safe international online pharmacies that help Americans afford medication, and its BeSafeRx program is right out of the big pharma playbook; and…wait, wait, there I go again…

The FDA, specifically its Office of Criminal Investigations, expends a lot of time and energy tracking down people who are intentionally selling fake, expired, or otherwise clearly dangerous pharmaceuticals. Those efforts save lives and ought to instill fear in those perpetrating these acts or those considering doing so. We should and do applaud FDA for those efforts. END_OF_DOCUMENT_TOKEN_TO_BE_REPLACED

Counterfeit Drug Bill Gets Tough on Criminals, Not Consumers

A bill was introduced in the House of Representatives last week that would make repeat counterfeit drug offenders subject to 20-year maximum jail-terms with $4 million fines for individuals and $10 million if the defendant is an entity. PharmacyChecker.com applauds the introduction of H.R.3468, Counterfeit Drug Penalty Act of 2011, as we believe, if passed, it will act as a deterrent against individuals and businesses who endanger the public health by manufacturing and selling medication that is not subject to government regulations and oversight at best, and deadly at worst.

We also recognize that the bill’s language is clear not to blur the distinction between counterfeit and safe imported medication. The bill states:

Nothing in this Act, or the amendments made by this Act, shall be construed to apply to a drug (as defined in section 201 of the Federal Food, Drug, and Cosmetic Act (21 U.S.C. 321)) solely because the drug is manufactured in or imported from a foreign country.

In contrast,  the proposed  Stop Online Piracy Act and Protect IP Act, now before Congress, defines all personally imported medicine, including genuine medication as a threat to the “public health.” This should be opposed. This language appears based on the lobbying rhetoric of the pharmaceutical industry to confuse lawmakers and consumers into believing the false proposition that all personally imported medicine purchased through online pharmacies is counterfeit. Thus, it’s a positive development that H.R. 3468 is crystal clear about the difference between counterfeit and imported drugs.

Stopping drug counterfeiters, whether they infiltrate the domestic supply chain by selling products to U.S. pharmacies or export dangerous drugs ordered online directly to Americans, protects the public health. The Counterfeit Drug Penalty Act seems to go after the real bad guys while not interfering with access to safe and affordable imported medicine and we hope it passes soon.