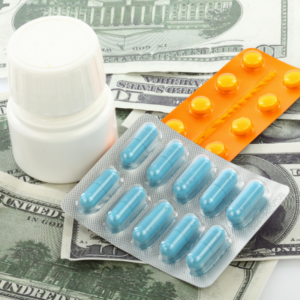 The relentless deluge of Big Pharma bunk in the media continues. Dr. Kristina Acri, an associate professor of economics at Colorado College, recently published an op-ed in a local Colorado newspaper – The Pueblo Chieftain – called “Drug importation bill a poison pill.” Dr. Acri is against a state bill supported by Congressman Jared Polis (D-CO), who is also running for Governor, that would allow the wholesale importation of lower-cost medication from Canada. This bill is similar to one recently passed in Vermont, which came from drug importation model legislation created by the National Academy for State Health Policy.

The Pueblo Chieftain did not include that Dr. Acri has worked for the Pharmaceutical Researchers and Manufacturers of America. She is also known as a staunch supporter of the drug industry’s intellectual property rights agenda.

Congressman Polis was given ample opportunity to respectfully refute Dr. Acri’s stance in his own op-ed called “A safe way to lower drug costs.” I liked his op-ed. Feel free to read both of their positions, but one thing he wrote about Dr. Acri’s piece was wrong: “I very much appreciate Dr. Acri offering a constructive, fact-based critique that enriches our community’s discussion of this important issue.” Her piece was decidedly not fact-based, and it needs to be called out. Let’s break it down.

First, she writes: “A study by the Organization of Economic Co-Operation and Development showed that counterfeit drugs accounted for 2.5 percent – or $461 billion— of the world drug market in 2013.” I looked at that report, and it states that in 2013 international trade in counterfeit and pirated goods (not just drugs) “represented up to 2.5% of world trade, or as much as $461 billion.” That section is referring to total world trade – not solely pharmaceuticals. That total includes all counterfeit products ranging from “high-end consumer luxury goods such as watches, perfumes or leather goods, to business-to-business products such as toys, pharmaceuticals, cosmetics and foodstuffs.” Over the years, the industry has plucked numbers out of thin are on the topic of counterfeit drugs, getting “facts” to stick in the media, but this one really took the cake.

See the study for yourself: https://read.oecd-ilibrary.org/governance/trade-in-counterfeit-and-pirated-goods_9789264252653-en#page12.

Second, she writes: “Further evidence may be found in the number of investigative cases opened by the federal Food and Drug Administration, which have increased more than tenfold over the past two decades.” She does not identity what those cases are. What she implies, however, is that the FDA is investigating more alleged and real crimes involving counterfeit drugs, and because those investigations have increased, the problem itself has as well. This a logically fallacy that leads the reader to mistake correlation with causality. Yes, there are more investigative cases by the FDA (and some of them seriously important) but that doesn’t mean the problem is increasing at a corresponding rate.

To the point above, Dr. Arci goes on: “These numbers are on the rise and will rise even more sharply if Colorado, under a Gov. Polis, would enact a drug importation scheme.” She offers no evidence to support that claim. The state drug importation bill envisioned by NASHP would work lock, step and barrel within FDA regulations and our drug supply chain. Vermont’s new law, for example, cannot even move forward until the Secretary of Health and Human Services agrees on its safety as posing “no additional risk” to public health.

Fourth, Dr. Acri writes: “Our nation has the safest drug supply in the world, the result of safeguards and regulations that protect all of us.” Yet a person who is apparently opposed to any policy that might hurt the profitability of the pharmaceutical industry, Peter Pitts, stated with great conviction before the Utah Committee on Health and Human Services that medication sold in Canada is equally as safe as in the U.S.

Fifth, in supporting her “fact” above, she looks to FDA data from 2005. That data comes from an FDA initiative called “Operation Bait and Switch” during which the FDA seized prescription medication ordered from online pharmacies, some posing as “Canadian.” The medication orders actually came from Costa Rica, Israel, Vanuatu, and India. Acri quotes former FDA Acting Deputy Randall Lutter: “Of the drugs being promoted as ‘Canadian,’ 85 percent appeared to come from 27 countries around the globe. Many of these drugs were not adequately labeled to help assure safe and effective use and some were found to be counterfeit.”

Here’s what she doesn’t say: The FDA agents seized drugs that they knew did not come from Canada! Interestingly, they found that “15% of the ‘Canadian’ drugs in the parcels examined actually originated in Canada. The remaining 85 percent were manufactured in 27 different countries.” This FDA action might demonstrate that online pharmacies misrepresent the sources of medications shipped, which some of them do (which is why PharmacyChecker is strict on its transparency policies), but it does absolutely nothing to undermine the importation bill recommended by Congressman Solis. That bill is focused on imports from wholesale pharmacies in Canada that would need to be registered with the state of Colorado.

Furthermore, what percent of drugs purchased in U.S. pharmacies do you suppose originated in the U.S.?

If we’re talking about the active pharmaceutical ingredient, then the answer is about 20% (meaning 80% of APIs in U.S drugs are foreign-made). What about the finished drug products? Well, the FDA says 60%, but our research shows the number is closer to 30% (meaning 70% of medications sold at U.S. pharmacies are foreign made). I’ve spoken recently to an industry insider who says the number is more like 75%. So, Dr. Acri could make similar claims about medication sold in our own drug supply chain.

When total pharma shills and lobbyists write this stuff, it’s frustrating. It’s much worse when people of substantial expertise and with academic pedigrees do it.