Long story short: Between around 2009 to 2012, the owners of CanadaDrugs were involved in wholesale quantity distribution of drugs to medical offices, which was a separate business from their online pharmacy retail operations. A counterfeit batch of the cancer drug, Avastin, exported into the U.S. was found in the European supply chain, which led to an investigation by the FDA Office of Criminal Investigations and eventual plea deal by CanadaDrugs’s owners. I wrote about what happened to CanadaDrugs back in July when they closed operations pursuant to that plea deal. As shown below, the sale of a counterfeit was unintentional.

What the FDA has wrong

The FDA’s press release mostly focuses on its efforts to prevent opioid and counterfeit drug imports and stop rogue online pharmacies. Then, it veers off to highlight what it calls a continuing effort involving the “Canada Drugs Online Pharmacy Network.” The FDA states:

“Another aspect of this year’s operation is a continuation of an effort that started back in 2012. As part of Operation Pangea V conducted in 2012, the FDA sent warning letters to the Canada Drugs Online Pharmacy Network. After the network ignored these letters, OCI began an investigation that culminated in April 2018 when Kristjan Thorkelson, a resident of Manitoba, Canada, together with several Canadian companies associated with Thorkelson, including Canada Drugs, admitted to widespread illegal sales of misbranded and counterfeit prescription drugs in the United States…Thorkelson and the associated companies were also ordered to permanently cease their illegal operations, surrender to the U.S. thousands of domain names and websites from their businesses and to cooperate with the U.S. Department of Justice and the FDA in ongoing and future criminal investigations conducted by the agencies.”

The warning letter to CanadaDrugs.com was not addressed to the Canada Drugs Online Pharmacy Network, as no such entity existed: it was emailed to a lawyer representing CanadaDrugs.com at the time. That’s a small detail, but in it we find the FDA inventing phrases in a manner that appears to fit a narrative it wishes to perpetuate. The warning letter was sent on September 21, 2012. According to the FDA’s recent press release, the OCI began an investigation when the letter went ignored. But an article in the Wall Street Journal from March 7, 2012, almost eight months before the warning letter was sent, demonstrates how that’s wrong:

“Authorities investigating the importation of low-cost foreign pharmaceuticals into the U.S. have identified a supply chain that may have allowed fake cancer drugs to reach U.S. clinics, according to investigators and documents reviewed by The Wall Street Journal.”

That means an investigation began long before the warning letter to CanadaDrugs was sent. In reference to the wholesale pharmacy sales, the article stated:

“Investigators don’t believe Mr. Haughton knowingly traded counterfeits and he hasn’t been accused of a crime. But because it is illegal to sell non-FDA approved drugs in the U.S., he and Mr. Thorkelson and their businesses are being examined as part of a criminal investigation.”

In other words, they were selling lawfully-made medicines with labeling in accordance with the laws of other countries.

If you feel like it, you can read the indictment of CanadaDrugs, which also shows that the FDA was involved long before the September 2012 letter.

It’s not insignificant to also emphasize that the warning letter of 2012 did not accuse CanadaDrugs of selling a fake or poor-quality product at all. The FDA targeted the sale of lawfully-manufactured generic Viagra among other drugs that violated the Food, Drug and Cosmetic Act because they appeared to be unapproved and/or misbranded. As it happens, CanadaDrugs removed generic Viagra from its website after that letter, and I believe the other drugs identified, too. We know because we verified them. That demonstrates that CanadaDrugs did not ignore but was responsive to the FDA’s warning.

Who admitted to selling counterfeit drugs?

Not CanadaDrugs or its owners. You’ll see that the FDA states that CanadaDrugs “admitted to widespread illegal sales of misbranded and counterfeit prescription drugs in the United States.” I read the plea agreement and CanadaDrugs did not admit to selling counterfeit drugs—other indicted parties did. That’s not excusing CanadaDrugs, which profited from these sales but it’s calling out another false statement in the FDA’s press release.

Some reports about this case seem to imply large volumes of counterfeits being sold. The amount of the wholesale pharmacy sales was identified by the FDA as $78 million. By reading the indictment, I would guess that the unintentional counterfeits were far less than 0.5% of otherwise lawfully-manufactured medicine. Again, that doesn’t excuse the sale of counterfeits, which are entirely unacceptable, but it explains their volume vs. otherwise safe and effective medicines.

What happened to the domain CanadaDrugs.com?

If you go to CanadaDrugs.com right now, you’ll see the domain seizure notice from the FDA Office of Criminal Investigations and the U.S. Department of Justice below. Seizure by the government is when something is taken away from a person or company without legal proceedings with the accused, a trial, etc.  But according to the FDA’s press release, CanadaDrugs surrendered its websites as part of the plea deal. In this case, the FDA’s press release was accurate. 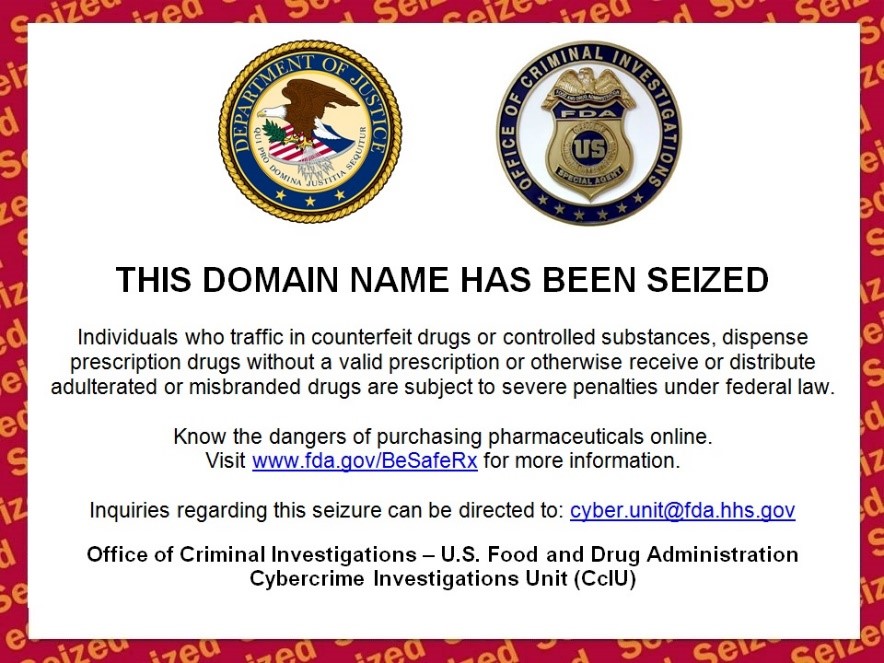 In fact, it appears that the FDA was well aware of how important CanadaDrugs.com was to its customers and their ability to obtain affordable and safe medicine. In April of this year, when the plea was announced by the FDA, it gave CanadaDrugs.com over three months to stop its online pharmacy retail business. CanadaDrugs.com transparently announced (probably as part of the deal) on its website that it was shutting down due to a plea agreement with the U.S. DOJ. During that time, in effect, the U.S. was explicitly permitting CanadaDrugs.com to sell medicines into the U.S. That was smart. There’s a medical term for that called continuity of care, meaning it’s important not to interrupt medical treatment, such as obtaining prescription drugs. You can read CanadaDrugs.com’s letter to its customers here.

To some, this blog post might seem like overkill in analyzing these details. But I have to ask why the FDA is toying around with the truth… Keeping to the facts should still matter. I believe it’s part of a larger trail of evidence showing a continuing effort, possibly in collusion with the pharmaceutical industry, to misinform the public about the CanadaDrugs.com case to cast a cloud over all international online pharmacies.