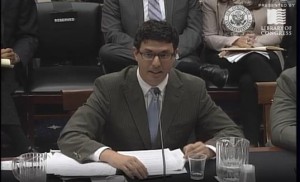 Our vice president, Gabriel Levitt (Gabe), presented testimony at a congressional hearing yesterday, urging congress to protect Americans’ access to safe and affordable medication online. The hearing was held by the House Judiciary Committee’s Subcommittee on Courts, Intellectual Property, and the Internet and titled “The Role of Voluntary Agreements in the U.S. Intellectual Property System.” What exactly does this hearing have to do with Americans buying medication from Canada and other countries?

Basically, the government is encouraging large American companies to band together through “voluntary agreements” to stop online piracy and intellectual property violations online and this hearing discussed the effectiveness of these agreements. The heads of big business trade associations attended primarily to defend current practices and encourage even stricter rules. Although the hearing’s focus was about the online availability of copyright material like music and movies, some committee members were pleased to hear about the online pharmacy side of things. Gabe discussed the voluntary agreements adopted by leading Internet and credit card companies to combat rogue online pharmacies through their association in the Center for Safe Internet Pharmacies , also known as CSIP. CSIP’s efforts, which rely on data powered by LegitScript, have successfully curbed access to some dangerous web pharmacies, but they also wrongly categorize all non-US online pharmacies that sell to Americans as “unapproved.” This may scare Americans away from safe and affordable pharmacies, including sites approved by PharmacyChecker.com. Gabe said:

We believe that voluntary agreements can be a useful tool in protecting Americans from counterfeit products, but they can also be misused in anti-competitive ways which scare and thwart Americans from accessing affordable medication. This leads to poor medication compliance with negative health consequences and also goes against the Administration’s desire that voluntary agreements not be used to impede competition.

We’d like to thank Subcommittee Ranking Member Congressman Melvin Watt who initiated the invitation to Mr. Levitt. While Congressman Watt favors voluntary agreements to combat online intellectual property violations, he genuinely sought insight into how American consumers can be negatively affected by such agreements. You can read the full PharmacyChecker.com congressional testimony and watch the hearing. (Gabe’s testimony begins at 58:00)